This year’s show will feature a tribute to D-Day, the Allied Invasion of Normandy. A flying reenactment will combine C-47s and a live airborne demonstration, sound effects, and narration to become an interactive historical experience for all ages.

More than 40 World War II-era aircraft are set to participate in the airshow. The unique gathering of D-Day aircraft will include C-47 That’s All, Brother, the aircraft that led the aerial invasion of Europe and the B-29 Superfortress, the aircraft type which dealt the final blow ending the war. There will be exciting fighters such as the P-51 Mustang, P-40 Warhawk, Vought F4U Corsair, and a Bell P-39 Airacobra. The aerial activities will be supported on the ground by personal appearances from numerous World War II veterans, living history reenactment groups, and military vehicles.

“This year will be our third year to put on this airshow, we continue to raise the level of excitement for our viewers and continue to draw more people in from the community,” says CAF President Bob Stenevik. “Our goal is to make CAF Wings Over Dallas the nation’s pre-eminent annual World War II-themed airshow and military reenactment event.”

Frost Bank is sponsoring the show for the third year. Paul Koch, president of Frost, Dallas Region, said the company was proud to return as a sponsor in 2018. “This is the kind of history lesson you can’t read in a book or watch on a screen,” he said. “We are excited to help bring it to Dallas Executive Airport, southern Dallas and the entire north Texas region.”

Tickets are on sale at www.wingsoverdallas.org with advance purchase discounts available. Rides are also available through the website in numerous World War II aircraft. 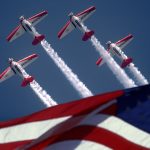